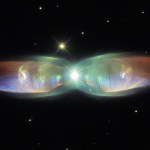 The idea of a company exploring for commercial reasons is nothing new. While exploration has always been conducted to satisfy human curiosity, it has almost always had an economic rationale as well.

Think of the Hudson’s Bay Company in Canada, Jamestown in Virginia, the East India Company in India or the Norwegian whaling expeditions in the Antarctic. These all were done for commerce as well as adventure. Even the Lewis and Clark Expedition — arguably the greatest officially authorized expedition in North American history — was carried out to obtain both scientific and commercial information.

What is new about commercial space exploration is the global context in which the planned exploration will occur, and how the world’s various legal systems will regulate it. Historical explorations were carried out in a world in which most of its inhabitants were unaware that many of the other inhabitants existed. When groups did encounter one another, the most common result was that surprise, avarice, fear or some combination of the three led to conquest, and then profit.

PIERRE, S.D. (Feb. 4, 2016) A bill passed today by the South Dakota House would legalize the production and processing of industrial hemp for commercial purposes in the state, setting the foundation for people there to nullify federal prohibition in practice. Rep. Mike Verchio (R-Hill City) along with a bipartisan coalition of 39 cosponsors introduced House…

SALT LAKE CITY, Utah (Feb. 4, 2016) – A Utah bill would legalize medical marijuana in the state, setting the foundation to nullify in practice the unconstitutional federal prohibition on cannabis. Introduced by Sen. Mark Madsen (R-Saratoga Springs), Senate Bill 73 (SB73) sets up a state regulatory regime that would allow medical marijuana to make its…

Ben Carson falsely accuses Cruz For “pushing the narrative that Carson is dropping out”.

Marco Rubio is found to be pushing a drop out narrative well before the Cruz team was involved. And CNN went public with the rumor, attributing it to correspondent, Chris Moody’s tweet. Carson had no idea that it was his own press statement which led to the speculation. But immediately upon the live report’s airing, Chris Moody issued a clarification tweet.

The Washington Post has been following the latest in the Ben Carson campaign. Carson has been in Washington for the past day or so, and made severe cuts in his campaign staffing. The article discusses several items and it becomes evident that Armstrong Williams (the controversial confidante who’s campaign activities led to several December top resignations) is further entrenched in the role of speaking on behalf of the Carson campaign.
What follows is an excerpt of that WaPo article.
Read more

Today, I read a question from a respected TAC supporter that I’ve seen countless times from libertarians. I thought it would be good to share my response.