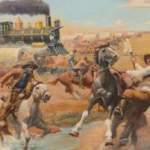 Word rang out across the Western world that at noon on the 22nd of April, 1889, upon the sound of a shotgun fired by a U.S. cavalryman, anyone with the guts and wherewithal to do so could rush into the Unassigned Lands in the center of present-day Oklahoma and claim their 160-acre spread from two million acres’ worth of government-designated tracts. In a singularly American feat of bravado and imagination, 50,000 people — including nearly a thousand African-Americans — from every state in the Union descended on the area to do just that.

See also Trail of Tears and Blessings where Mr. Dwyer unfolds the story of “Reneging on its treaties, the U.S. government forced the “Five Civilized Tribes” in the East to move to Indian Territory in Oklahoma, causing death, destruction — and faith in God.”

Previous Post: Maryland Senate will Consider ‘Right to Try’ Bill to Nullify in Practice Some FDA Restrictions
Next Post: Nullification: “If you love liberty you can’t stand the federal government”