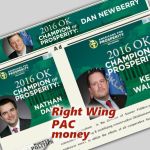 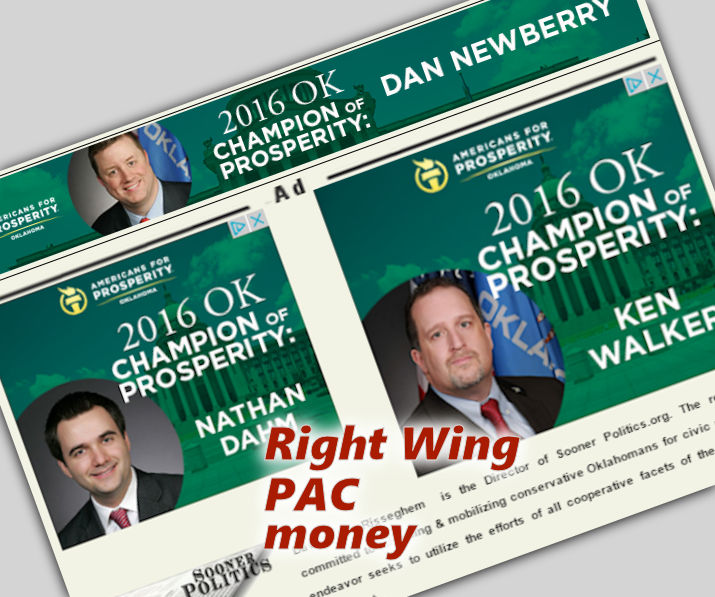 Just 4 weeks ago, Oklahoma’s Republican leadership in the legislature were acting like big-spending liberals, and The Democrats played the bizarrely uncharacteristic role of refusing to pass new taxes & fees.  There were perhaps 20 % of each house who were truly faithful to cutting government spending instead of cutting further into Oklahomans’ family budgets.
John Tidwell, of AFP’s Oklahoma organization quickly sprung into action, partnering with Oklahoma Council of Public Affairs (OCPA) to take on the biggest threats, namely the Oklahoma Chamber’s idea to expand Medicaid and set up a state exchange for free healthcare.  The effort succeeded, partly due to the Democrat strategy of refusing any tax increases without FIRST passing the expansion of ObamaCare in Oklahoma.
And now AFP is seeking to gain political ground by supporting legislative allies who stood strong with them. Several legislators who face primary opponents are getting campaign boosts from AFP.AFP’s national web is highlighting the Oklahoma legislative effort and naming names. Read their recount of the session, here: 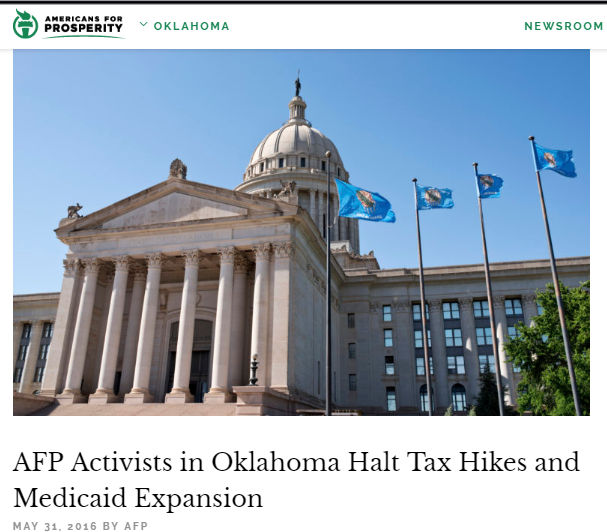 MAY 31, 2016 BY AFP
In the final weeks of Oklahoma’s legislative session, filling the state’s $1.3 billion budget hole was on everyone’s minds – as was the possibility of expanding Medicaid through Obamacare.As state lawmakers considered new taxes and tax rate increases to fill the budget gap and fund Medicaid expansion, AFP got to work.Through the hard work of our grassroots activists, as well as radio, digital and print media campaigns, AFP’s outreach efforts educated taxpayers throughout Oklahoma about the dangers of Medicaid expansion and the importance of keeping tax rates low.

Thousands of Oklahomans reached out to their elected officials through letters, emails and phone calls to let them know they opposed increasing taxes and expanding Medicaid.

Thanks to our efforts and those of a strong coalition of free-market organizations across the state, state lawmakers passed a budget agreement last week that achieved AFP’s two biggest priorities: no tax rate hikes and no Medicaid expansion.

Since Obamacare’s inception, AFP has led the fight against Medicaid expansion in Oklahoma and in states across America. It’s a fight that isn’t over – some lawmakers are bound to try and burden taxpayers and entangle our state’s healthcare programs with Obamacare once again, and when they do, we’ll be there with our network of citizen activists to stand against it.

Victories like this show our grassroots efforts work. As AFP activists spread the word of economic freedom and inspire others to let their voices be heard, lawmakers at all levels of government will listen.