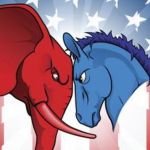 The major political parties now have forced state and federal governments to pay many of the party bills. We force taxpayers to foot the bill for all our party primaries. this used to be done through the caucus system. Louisiana finally decided not to give in to this graft. They hold one primary with all candidates from all parties. Then the top two advance to the general election (if needed). Oklahoma never had a presidential preference primary until 1988. That’s when the Democrats hatched a scheme to create a southern ‘Super Tuesday’, to get a southern Democrat nominated.
Republican grassroots groups hate the presidential preference primary because the result is usually a more heavily-funded moderate from the “tall building” sector of the party.
Even our state election board is stacked. the judges who oversee the election process are not even real judges. They are party appointments. But only the two largest parties get to appoint a judge.  So much for justice for any minor party getting a fair election?