Where the Spirit of the Lord is – there is Liberty!

May you be where He is and go where He leads.

May you know His Will, His Way, His Word and His Touch as you go…

Drain the Swamp!
by John Stossel

President-elect Trump says he’s uniquely qualified to “drain the swamp” in Washington, D.C. He can do it, he said at one debate, because as a businessman, he understands American cronyism. “With Hillary Clinton, I said, ‘Be at my wedding,’ and she came to my wedding. You know why? She had no choice because I gave.”

He said that’s why he gives money to politicians from both parties. “When they call, I give. And when I need something from them two years later, three years later, I call them. They are there for me!”

That’s crony capitalism. Ideally, laws are applied equally; no one gets a special break because he gives money. But today’s complex government allows the politically connected to corrupt … most everything.

The election is over. Trump has won. Celebrities are running for the hills, rioting and protests have broken out in major population centers across the country, and I heard from a friend watching, that a talking head at Good Morning America (the Thursday after the election) felt the need to explain the vote as a reality not a nightmare.

Trump, trumped Clinton – there’s no way around that. With the media projecting Hilary as the winner most of last year and throughout the night – even after he took Florida – it was clear by Wednesday morning that the media, liberal America and the celebrity class were shocked beyond reason at the result of this election. I’m not surprised – their total inability to understand the thought processes and lives of middle America represent a majority of reasons for the outcome of this election.

Jenni White on facebook says this about herself: Former Common Core fighter. Current homeschool teacher/parent, writer, homesteader, Christ follower.  You can follow her here on facebook.  She is on the board for Rope2.0 and you can see some of their work here on Education Issue

Shared via Finding Gems & Sharing Them – The 2016 Election: A Victory for Middle American Values?

For several days now I have been wanting to do a post on judicial retention in Oklahoma. Sadly, I was never able to find the information that I wanted to do a post I would have been satisfied with. It is election eve and many of you have already voted in early voting. I apologize for that, but this is all that I have found. My summary version on how I plan to vote is that at the moment of writing this Hudson is the only one I plan to vote to retain. My general philosophy is “When in doubt, vote them out.” Hudson was the only one I could find any philosophical reasons to support him. OCPAC said,

He was recently appointed by Gov. Fallin to the Criminal Court of Appeals. Hudson appears to be a serious Christian, and everyone consulted gave him very high marks.

You can often tell a little about the judicial slots by who appointed them and that tells you a little about the current problems we face (that information on appointments is documented in the Sooner Politics article referenced below.

The best article I found was published by OCPAC. The section on judges is reprinted here:

Finding Gems & Sharing Them – To Retain or Not to Retain…

How Can We Trust Them with More Money$$

said no conservative state ever!  #VOTENOSQ779

OKGRASSROOTS — Let’s Make Our State Sales Tax Rate the Highest in the Land! 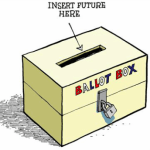 Bev Harris founded blackboxvoting.org in 2003, when she snooped around some trash cans outside of a voting station and found irregularities that proved the voting machines had been tampered with.  She made the “Hacking Democracy” documentary exposing how vulnerable the voting system is and how easy it is to manipulate. Lately she has discovered a new twist to the fraud where the voting machines can be manipulated remotely by one person and how Hillary Clinton is primed to use this vulnerability to sway votes in her favor.  This is the latest from her interview with Alex Jones:

Finding Gems & Sharing Them – InfoWars: Video Interview with Bev Harris of Black Box Voting and Election Fraud — Some Things You Can Do!