Today the House of Representatives passed an important bill for sportsmen and supporters of the 2nd Amendment.  HR 2406 will increase opportunities for hunters, anglers, and recreational shooters, eliminate regulatory impediments, and safeguard against new regulations while protecting 2nd Amendment rights.

Congressman Bridenstine was congratulated on his support for the legislation by Dianna Muller from Tulsa, a world champion shooting sports competitor.

Dianna Muller retired from theTulsa Police Department after 22 years of service.  She is now in full-time pursuit of her passion “to introduce shooting sports and showcase gun owners and the 2nd Amendment in a positive light.”


Dianna is a world champion shooter in individual and team competitions. She led the Ladies Team USA to the gold medal in the World Shotgun Championships in Italy in 2015.  She also won the ladies division of the 2015 NRA World Shooting Championship individual competition, involving twelve different shooting disciplines.  As a professional 3-Gun competitor, she is a featured personality on the Outdoor Channel and the Sportsman Channel.

Michael Bates; one of Oklahoma’s most established and respected political bloggers, has found some really strange details about a very well-funded campaign for Tulsa County Sheriff. Vic Rigalado has raised more money than all 9 other candidates COMBINED! But what’s really puzzling is that the money seems to come in large part from a small group of folks who are connected to a company located in another county.

And many of the very large contributions come from folks who own very modest residences.
You can study the matter in greater detail at Batesline.com.

TedCruz.org reports that this Sunday, his campaign team is coming to Tulsa for a 1:30pm rally, at the Fairgrounds Central Park Hall.The event starts at 1:30pm.Free tickets can be reserved online. Details:

During History’s Pivotal Moments, Ted Cruz Has Always Been There for the Second Amendment

The horrific tragedy of Newtown had touched the hearts of the nation, and every news outlet — every one — was blaming the Second Amendment community for what happened there. GOA was receiving death threats — not only against us, but against our children.  Even Fox News was opining that the battle against Bloomberg’s gun control was hopeless, as every news outlet spent every hour of the day predicting that our organization — and the “gun manufacturers’ lobby” [sic] in general — would be absolutely and totally destroyed.

It was in this context that Senator Ted Cruz agreed to lead a team of senators to defeat every word — EVERY WORD — of Bloomberg/Obama gun control.

Working with us, Cruz implemented a brilliant strategy which used the complex rules of parliamentary procedure to send Barack Obama and Harry Reid running with their tails between their legs.

And the Cruz/GOA victory emboldened gun owners to take the Senate away from the anti-gun crazies in 2014 and return it to pro-Second Amendment principles.

Make no mistake:  Had Ted Cruz not done what he did, the gun rights community would have been completely demoralized and defeated.

We would have been unable to achieve the electoral victories that we won in 2014, and instead, we would have been fighting desperately to fend off the succession of follow-up gun control measures that Bloomberg and Obama promised.

But that’s not the way history unfolded.

Because of Cruz, the efforts to enact gun registration and gun and magazine bans were stopped in the Senate.

And with Gun Owners of America supporting Cruz’ strategy, the liberal media blasted GOA for helping him defeat gun control in the Senate:

* “The group [GOA] has already been successful in both freezing senators, particularly Republicans, who have appeared to be on the fence about supporting bills to expand background checks.” — New York Times, April 3, 2013

* “When Sen. Tom Coburn, an Oklahoma Republican, backed away from bipartisan talks to expand background checks earlier this year, he did so after Gun Owners of America and its members flooded the senator’s office with e-mails and phone calls.” —Slate, April 4, 2013

But that’s not all.

Cruz rapidly followed up our victory over gun control by leading the effort to kill Marco Rubio’s anti-gun Gang of Eight amnesty bill. Cruz did that by arranging to have the Senate-passed bill “blue-slipped” in the House as an unconstitutional Senate-initiated revenue measure.

Furthermore, Cruz put a “hold” on the Senate calendar to prevent Harry Reid from secretly trying to stick the unconstitutional Senate measure onto a minor House-initiated revenue bill.

Had Cruz not implemented our successful strategy, up to 11,000,000 new anti-gun voters would have turned the entire country into an anti-gun “utopia” comparable to California.

Of course, none of this was a surprise to us.  Cruz had helped argue the Heller case.  And as a result of Cruz’ advocacy and the arguments of other top Second Amendment attorneys, the Supreme Court has now recognized this fundamental truth:  The Second Amendment is a God-given individual right applicable to all Americans.

Marco Rubio is a good-hearted articulate young man who, as he gains more experience, could have a great future in the Republican Party.

But his inexperience in negotiating with Senator Chuck Schumer over the Gang of Eight amnesty bill almost cost us EVERYTHING.  Had Marco succeeded in giving a path to citizenship for 11,000,000 anti-gun voters, we would have been on a glide-path that ultimately would have made our battle for gun rights hopeless.

Similarly, many of our good-hearted friends have been inspired by Donald Trump’s willingness to stand up to the feckless Republican establishment.

But, if he were to gain the nomination, we just don’t know where Trump would be on the Second Amendment.

In his autobiography, Trump endorsed the semi-auto ban and a longer waiting period on firearms purchases.  And, caught unaware by a questioner, he endorsed Chuck Schumer’s plan to take away guns from anyone Barack Obama chose to put on a secret list — which suggests he doesn’t understand some of the seminal issues which face us.

And now Trump is bragging about the “deals he’ll make” specifically with Chuck Schumer and Nancy Pelosi.  That’s REALLY SCARY.

So, in short, that’s why we believe Ted Cruz is the ONLY REAL CHOICE for gun owners.

In head-on-heads, Cruz does well against Hillary Clinton — unlike the incendiary Trump.  Thus, he has a better chance of uniting the base and winning the election — rather than going down in a burst of flames.

And, when he arrives at the White House on January 20, the entire wretched “legacy” of Barack Obama will be repealed — on Day 1.

For this reason, Gun Owners of America urges you, in the strongest possible terms, to support Ted Cruz for president.

Help GOA make a big splash in the elections and elect pro-gun candidates who are like Ted Cruz.

Paid for by Gun Owners of America.
www.gunowners.org
Not authorized by any candidate or candidate’s committee.

The media loves to trot out college professors as a way to shoot down every attempt to resist federal power. They’re cited as experts, and they almost always favor more federal power. Today we’ll cover a common example which shows they often don’t have a clue what they’re talking about. 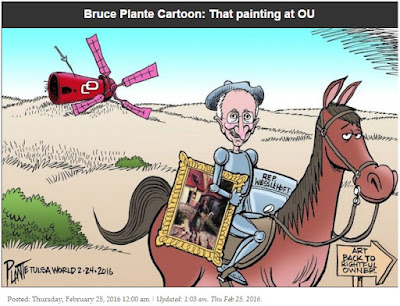 The gentle and unassuming Representative Paul Wesselhoft has been properly honored in Oklahoma media for his diligent work to right a terrible wrong.
Paul has successfully shamed David Boren and the regents of Oklahoma University into returning a masterpiece oil painting which Nazi German operatives stole from a Jewish family some 7 decades ago.
Tulsa World’s political cartoonist, Bruce Plante, depicts Wesselhoft as the ‘knight in shining armor’, rescuing the hostage artwork. Unfortunately, OU has wrongfully created several litho reproductions and sold them, keeping all that money. At last check, the OU campus is still trying to sell their remaining stock. It is also uncertain whether the official flagship university of our fine state will continue to violate international law by marketing illegal copies of the painting.
At any rate. God bless Saint Wesselhoft, friend of the doubly victimized holocaust survivors.

CHARLESTON, W. VA.. (Feb. 25, 2016) – A West Virginia bill that would set the foundation to nullify in practice some Food and Drug Administration (FDA) rules that deny access to experimental treatments by terminally ill patients passed out of the state Senate yesterday. A bipartisan coalition of four representatives introduced Senate Bill 416 (SB416)…