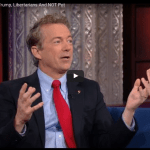 Rand Paul on The Late Show with Stephen Colbert Published on Jan 7, 2016 Senator Rand Paul took a break from the campaign trail to talk haircuts, campaign trail fashion, foreign policy, Trump and Christie, and pot… nope, he's not talking about that. Watch video via OKGrassroots

To answer the call to serve as a watchmen on the wall, I have been a grassroots activist for a long time almost fifty years now (and yes I started young!). Philosophically I am a conservative, limited government freedom lover and a co-founder of R3publicans in 2008. I currently live in Oklahoma and serve as Communications Director for OKGrassroots and Constitutional Liberty Coalition but I cut my teeth on politics with Associated Conservatives of Texas and the Traveling Liberty Bell. Thank you for all you do for life and liberty too!