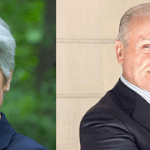 OKLAHOMA CITY (AP) —Two U.S. presidential hopefuls and some of their supporters in Oklahoma are suing the state, arguing its ballot-access laws unconstitutionally discriminate against third-party and independent candidates for president.

In a complaint filed in U.S. District Court in Oklahoma City, Tulsa attorney James Linger seeks an injunction to stop the Oklahoma Election Board from enforcing its ballot-access laws. An Election Board spokesman declined to comment on the lawsuit.

Read more from The Journal Record (subscription required) and KGOU.