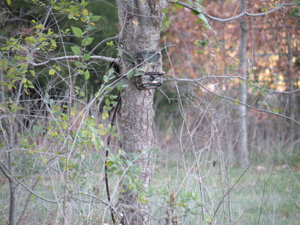 “Last Thursday he noticed the video camera mounted in a tree and trained on his daughter’s yard and windows.  She and her father, Steve Nash, suspect the police wanted to catch him feeding cats that the city believes are feral, which they said has been an ongoing issue between him and the city. Nash said he earlier was charged with the city offense of feeding feral cats and was placed on probation.  Nash said he addressed the Platte City Board of Aldermen recently, protesting what he called government bullying.  A person in civilian clothes came and removed the camera without identifying himself.”