Dateline January 28, 2016 Megyn Kelly, a former attorney, now Fox News journalist, conducted herself with grace and grit this week. GOP front-runner, Donald Trump, made her the target of his wrath promising he would not participate in the GOP Fox News Debate if she were one of the moderators.  Fox News stuck by her […]

Unfortunately, ROPE has a good deal of skepticism regarding the new Oklahoma Educational standards approved by the Board of Education today. Let me be clear here, the new standards were approved by the board just today, so none of us… Continue Reading →

Senator Kyle Loveless is deeply committed to the cause of Asset Forfeiture reform. During the last few weeks of last Spring, and through the summer & autumn; Loveless has poured significant time, resources, and significant political capital into the cause.

The concerned citizens of Oklahoma are now being asked to join Senator Loveless as “cosponsors” of his senate bill.

Like Loading...
For more than four decades, the pro-life advocates have sent billions on stopping abortion on demand. They have marched, campaigned, picketed, counseled, lobbied, threatened, and established large political foundations. Some of these efforts have been effective, but some have inadvertently become a real obstacle to victory in the fight to protect the unborn.
A very liberal cousin of mine has been a congressional staffer for a Democrat from Minnesota.

At a recent family reunion in Minnesota, I said; “The pro-life issue alone is enough reason for me to support republicans.”.

“The Republicans in Washington don’t want Abortion to ever end!”,
He responded. “They make too much money off the issue and  they get all these Catholics to keep voting for them because of the issue.”

The short dialogue left me thinking. I knew he was saying a few things that I could not refute. Many of the vast Catholic population in Minnesota are populist and support socialist ideas. If the Abortion issue was resolved, they’d go back to being staunch Democrat activists. And the devout people of several denominations are, to varying degrees, similar.

Now we have another issue. Fascist healthcare mandates (ObamaCare). So many Republicans used the issue to sweep into power in the past 5 years. Yet there is not one victory in all the congressional efforts. To the contrary, the most recent landmark ruling of the Supreme Court held that it was the very act of the House fully funding ObamaCare’s marketplace subsidies which effectively legalized the regulations. 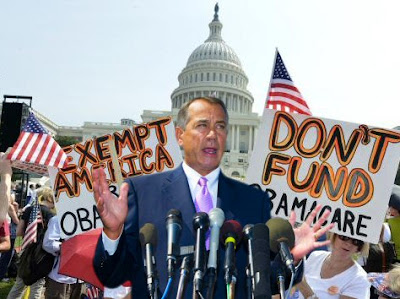 John Boehner ultimately orchestrated ObamaCare into settled law by blocking his fellow Republicans from taking a stand. the power of the purse is the ultimate weapon of congress. In 2011, the republican leadership said; “We have to wait until the Senate becomes Republican.”.
When both houses became Republican, they changed the narrative to “We can’t fix it until Obama’s gone.”.

Senate Majority Leader Mitch McConnell (R-KY) and Speaker of the House John Boehner (R-OH) are desperately trying to avoid a government shutdown, and they’re using pro-life organizations to do it.

According to a source with close ties to the pro-life movement, McConnell and Boehner spent the month of August warning pro-life organizations, including National Right to Life, Americans United for Life, Susan B. Anthony List and Family Research Council, against backing conservatives’ efforts to stop taxpayer funding for Planned Parenthood, the country’s largest abortion provider, through the Continuing Resolution (CR).

This is a tall order for organizations whose primary focus is ending abortion.

“McConnell and Boehner are just doing this to make it seem like the pro-life groups aren’t unified on the issue,” one source with close ties to the pro-life movement said who was granted anonymity to speak candidly.

Many in Congress and throughout the country have been calling for a halt on federal funds to Planned Parenthood after undercover videos by the Center for Medical Progress became public in June. The videos depict the organization selling aborted baby parts for profit, which is against federal law.

National Right to Life has been echoing McConnell’s position that cutting federal funds to Planned Parenthood isn’t something Congress can do until a Republican president is in the White House.

Each of the aforementioned pro-life organizations refused to comment on whether or not GOP leadership has pressured them to oppose defunding Planned Parenthood through the CR. But National Right to Life has been echoing McConnell’s position that cutting federal funds to Planned Parenthood isn’t something Congress can do until a Republican president is in the White House.

Despite National Right to Life’s silence on the issue, there are a growing chorus of conservative aides who say the group has become nothing more than an arm of the Republican establishment, just carrying out orders from McConnell.

“When it comes to strategy and actually scoring votes they’re terrible,” one senior aide on Capitol Hill told Conservative Review. “They’ve gotten very cozy with leadership. They consider themselves to be legislative experts so when people in Congress put forward good [anti] abortion amendments they (National Right to Life) won’t support it. They actually actively work against it.”

The Tea Party Revolution got hijacked by Republican operatives. The message of opposing corporate welfare got buried. Much the same excuses were cited from the Obamacare capitulation. Last month, Senator James Lankford decorated himself with the mantle of “Champion Against Waste And Fraud”. He went on a book tour to pitch his own sequal to Sen. tom Coburn’s Waste Book. But just a few weeks later he voted to fully fund nearly all the waste he’d recently bad-mouthed.
He paid lip service to fighting Planned Parenthood. He even got some Washington pals to celebrate him as a champion for the unborn. And then he voted to fully fund Planned Parenthood’s source of federal grants.
Washington think tanks become institutions. Whole careers and cushy lifestyles become an enticement and a reason NOT to accomplish the mission which the little old ladies sent money to fix.

West Virginia HB2807 would legalize industrial hemp for commercial production and distribution in the state, nullifying in practice the federal prohibition on the same. The bill must pass in the House Agriculture & Natural Resources Committee to receive a full House vote. PLEASE TAKE THE FOLLOWING ACTIONS to support this important bill. 1. Call the…

FRANKFORT, Ky. (Jan. 28, 2016) – A Kentucky bill would take the first step toward prohibiting state cooperation with the enforcement of federal gun control measures, a move that would effectively nullify them in practice in the Bluegrass State. Rep. Diane St. Onge (R-Lakeside Park), along with nine cosponsors, introduced House Bill 236 (HB236) on…